Praise God for our women evangelists, called to minister in India’s most difficult states.

One of these women evangelists is Praisy George, who graduated with a Bachelor of Theology degree from India Bible College and Seminary in 2011. Three months before her graduation, she married Pastor Rathish P.G., from Jaipur, a city of 4.3 million in the state of Rajasthan, in north India, next to the border separating India from Pakistan. The city is known for its tourism, gemstone cutting, luxury textiles and information technology (IT).

Praisy George was born and raised in Kerala. Moving to Rajasthan was a culture shock for her. She did not speak the language. Local customs were strange to her. Officially, Rajasthan also has one of the smallest Christian populations in India (about 0.1%). In 2008, the strongly Hindu Rajasthani legislature passed a strict anti-conversion law. Harassment against Christians is especially fierce, even against hospitals and orphanages.

However, Praisy knew God had brought her to this difficult state, and she asked God to help her to adjust. God helped her to speak and read fluent Hindi, a major language spoken by most of the people. God also helped her to adjust to local customs and love Rajasthan’s people as her own. Now, she became a true partner in ministry with her pastor-husband and was not tied down at home.

In India, women evangelists have a ministry that in many ways, their husbands can’t have. Indian custom prevents male evangelists from entering a house whenever the male head of the house is absent, which frequently happens. However, a woman evangelist is free to enter another home by herself at any time to visit family members, whether or not the husband is home.

In the past, the wife of an evangelist had little or no Bible training and basically served only as the evangelist’s wife and mother of the couple’s children. But at India Bible College and Seminary, all academic programs are equally open to women and men. Male evangelists are encouraged to marry women who have advanced degrees and Bible training so their wives can truly become partners in ministry as well as wives and mothers.

With her Bible training and desire to reach others with the gospel, Praisy is joining with her husband to develop an active evangelistic ministry in the city of Jaipur. Her two young children enable her to develop a rapport with mothers and children of the city, praying with them, taking authority over illness and demonic oppression, and working to build a multi-generational fellowship of believers. 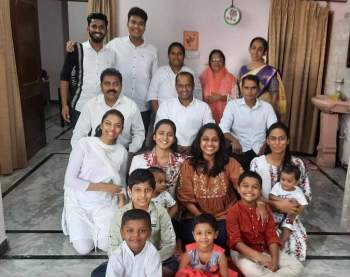 In Rajasthan, the number of Christians is tiny but growing. Actual figures may be three or four times larger than the official figures, which is a major reason why persecution against Christians in this state is on the increase.

Pray for the persecuted believers of Rajasthan.

Pray for the ministry of Praisy and her husband in Jaipur.

Pray for an unprecedented awakening in Rajasthan.

Pray for more Spirit-led evangelists, both men and women, for this spiritually needy state.