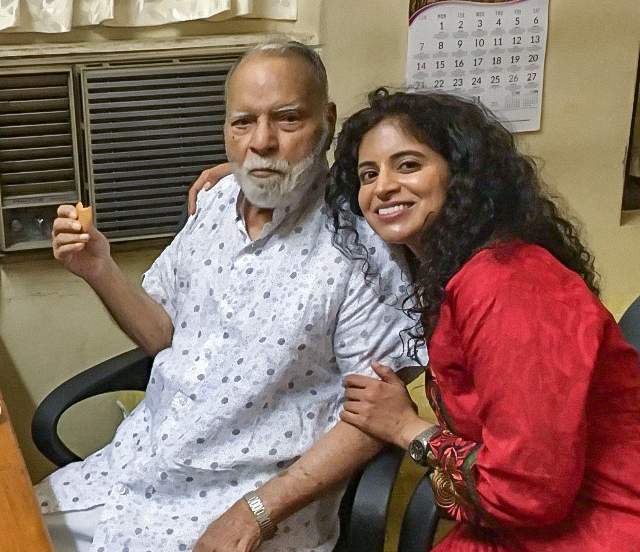 Pastor T.S. Abraham’s positions and ancestry make him well known to many. Among his many titles were India Pentecostal Church president and president and principal of India Bible College & Seminary. He is the son of India Pentecostal Church founder K.E. Abraham. Evidence of the reach of his life was seen when many thousands attended his viewing and funeral, and thousands more watched the services online and on television. Chief ministers, political party leaders and bishops joined a host of mourners to honor him and mark his death.

But I am T.S. Abraham’s eldest granddaughter. To me, he is simply Appacha. For me, what makes him extraordinary is the terrain of his heart—its height, width, depth, its shape and substance.

To know Appacha’s heart you must listen attentively with your own. My younger sister would say of Appacha, “One word in the morning, one word at noon, one word at night.” (This is only the slightest of exaggerations.)

Because of this, every sermon, every prayer, every solemn benediction, captivated us. Each word he spoke was weighted, and though he was small in stature, he spoke like a statesman, with both dignity and humility. In the resonance of his voice you heard the sound of a man who truly knew and revered the One he petitioned and praised.

When he studied in the U.S. in the 1950s or visited to minister over the course of the next 55 years, he would take long car rides to churches in the countryside with friends, who reported that hours would pass without a single utterance from him.

In the early 2000s in Southern California, I drove him two hours to a service where he was to preach. Not more than a few sentences were exchanged between us. In hindsight, however, I do wonder if the tight-lippedness had more to do with my...shall we say, rough driving skills. Perhaps the ride was one long silent prayer that we would make it safely to our destination.

His silence was not uncomfortable, however. While others make their presence known by talking about themselves, Appacha made you, his company, feel more present by his restraint. Being with him I found that my own words became more deliberate. He quieted minds that could be hamster wheels or rabbit holes, a million thoughts per millisecond, frantic or falling. With him, you became more alive, less agitated. All that ever emanated from Appacha was a steady calm.

I will forever have in my mind’s eye, memories of him standing at the Hebron bungalow entrance, his home since childhood. There, his hands would rest on the dark wood half-doors over the veranda, as he gazed out meditatively, looking at all the life and activity humming around him, or seated in the front room doing the same, taking everything in. “Be still and know that I am God,” is the verse that would reverberate silently as I watched him.

Because he was careful and reserved with his words in no way meant that he was dull. His wit would rise to the surface unexpectedly, perfectly timed— sometimes with puns for us grandchildren or a dry quip to an adult. But if the saying is true that silence is golden, Appacha’s was burnished to the highest shine.

What also shone bright was his affection for his grandchildren. We would sit for hours together, simply holding hands and looking at each other. He would ask, “How are you?” “Who are you?” “What are you?” He would make funny faces at us, purse his lips or wiggle his eyebrows. We would shower him with kisses and he would take our bare arms and scrape them against his stubble or beard. He would patiently let us muss his hair into all manner and fashion (sticking straight up was my personal favorite), letting us play without protest. We would eat a few of his favorite things to our bellies’ content — or distress: cashews, chocolates and ice cream.

I often say there is a particular sorrow for immigrants’ children: the years and miles that separate a grandparent and grandchild, leaving each without the other. However, Appacha was with me for several milestones.

He came soon after my birth and dedicated me to God at a Texas college town chapel. He and my grandmother came and stayed with us in California when my first younger sister was born. When I was in sixth grade, Appacha baptized me in the IPC Hebron Kumbanad church, taking my hand in his and leading me carefully down the baptistery steps — before invoking the names of the Trinity, immersing and raising me up out of the water. He attended my high school and graduate school commencement ceremonies. I spoke at my high school graduation. Later, Appacha said he had tears streaming down his face as he heard me talk about Jesus at a capstone event that administrators took great pains to keep secular.

When Appacha visited us in the U.S., my siblings and I did the equivalent of casting lots, and alternated nights to sleep with him. One night was a small bridge over continents and time, a rare chance to be near him. This trip of his was in the early 2000s. It was a difficult, wrenching period in my life, though I had never told Appacha so. My memories of nights with him prior to that particular trip are hazy, but this one is inscribed on my heart.

I was slim and he was slight. Together we occupied only half of the bed. Appacha held me close against him all night, tightly. I could hear the thump of his heart and and the rise and fall of his breathing as he embraced me. I remember the warmth of his arms, and though he was a small man, the strength of his hold. I was in my mid-20s, but that night I was a tiny girl again as he whispered repeatedly, “Makkale,” (“My child”) and kissed and cradled me. I cried. I never said a word. There was no need for me to speak or for him to say anything more. I wept softly through the night as he held me near until dawn, never letting go. I felt contained and whole. It was as if I could audibly hear Appacha’s heart telling mine, “This is what it is to be loved by God completely, fully. Just as you are.”

That etching of God’s love, carved by Appacha, is engraved deep on me. Appacha had no knowledge of what was going on in my life at that time and I never told him. But somehow his spirit had attuned to mine and God’s and he, in what might be called a prophetic act, displayed what it was the Divine wanted me to know. That through the darkest night of the soul, Jesus’ love is all-encompassing, all compassionate, all tender. No matter how far I’ve fallen or how desperate I feel, that night has remained with me as the sweetest reminder that maybe God’s care is not only like that of a father, a mother, brother or friend — perhaps it is also like a grandparent’s.

I left India for California eight days before he died. For 20 days prior to my departure, we had all of our meals together, we had afternoon tea together nearly every day and I would sit in his room writing and reading while he slept. Mostly I studied his face, his dappled skin, saw how his memory had faded and his hearing had gone, wondered what he was thinking about and watched the marked fragility of his aging body as his caregiver walked him slowly to and from his bedroom to the dining room. I kissed him every chance I could: before meals, after meals, whenever I went to his bedside. With my aunt and a few others, we shared communion together in the front room of the bungalow during the 94th General IPC Convention.

After we’d have lunch, while he napped, I sat at his desk. I would turn the pages of his Bible. I smiled when I found wedding vows written in King James English in the notes section at the back and saw that, yes, along with “thee,” “thou” and “troth,” “obey” and “submit” are indeed there. Well into his 80s, Appacha, on average, conducted two to five weddings per week.

I looked at the verses he’d underlined neatly in red. I think the Scriptures that move someone tell us a story about the person. The ones I saw in his Bible were confirmation:

“Blessed is the one you choose and bring near, to dwell in your courts! We shall be satisfied with the goodness of your house, the holiness of your temple!” Psalm 65:4

To me, between those lines is Appacha’s story: he made God’s courts and temple his dwelling place and he in turn offered his heart to Christ as his home. From that home, he found and offered goodness to countless others. He offered goodness to me. And Appacha, like the psalmist promised, was wholly satisfied. Then and now.

I fell ill so I had to return to California earlier than planned on this last trip. I always broke when it was time to say goodbye to Appacha, but it was a deeper grief this time. He had no serious ailments beyond old age when I departed, but I knew this was the last time I’d see him alive. He prayed for my father and I before we left for the airport. I felt the power of the words. But I can’t remember all the details of what Appacha said because I was memorizing the feel of his hands as they squeezed and held mine tightly, and then even tighter, just like he had held me that night in his arms years ago. I was caught up in the cadence of his voice and how the sound of it made my spirit feel. For me, the final words he left me with, true to who Appacha always was, were unspoken.

Appacha’s biography is full of stories of his resolve and courage. As a child, he endured hunger. As a young man, he was beaten for preaching the Gospel. As a spiritual leader, he faced many enemies. But most importantly, his biography is full of love. As Appacha, he enveloped me in his heart and wrote a story on mine.