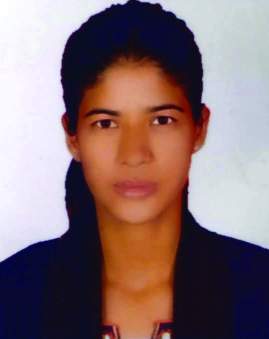 Praise God for His absolute goodness and love that make up for every lack in our lives.

Sarita discovered that truth for herself. She comes from Nepal. Before she committed her life to Christ, she says, she was a very angry and arrogant person, determined to get her own way and do whatever she wanted. She rebelled against everyone—except, strangely, her mother and father. That was because she was the only daughter in the family, and she was the most spoiled of her siblings. As far as her father was concerned, Sarita could do no wrong.

Then an unexpected thing happened: her father died. When Sarita’s father died, it seemed, her world collapsed, and she felt dead inside as well. Her father’s unquestioning support and love for a daughter was an exception in her Hindu world, and now that was over, never to return.

The rest of her childhood and youth seemed empty and unfulfilling. No one else treated her in the same way her father treated her.

In God’s providence, in spite of Sarita’s Hindu background, she wound up marrying a man who later became a Christian. Over time, as her husband came to know her better, he told her about the love of God that surpasses all understanding and is greater than any human love. He advised her to read the Bible (she had never read it before).

“God loves you,” he told her. “He is absolutely trustworthy, and you can trust Him to fill that empty place in your life. Trust in Him, and you will find peace and the life of heaven on earth.”

Sarita followed her husband’s advice and discovered that the God of the Bible was everything her husband told her plus much more. In 2008, she committed her life to Christ and discovered that all her anxiety, fear and depression ended. God became her Father. She developed a relationship with Him and found His love greater and more profound than the love of her earthly father.

She began to assist her congregation in different ways and discovered over the years she had a spiritual gift of teaching.

As time passed, Sarita realized that she needed a more disciplined study of God’s Word she could not gain on her own. She wanted to know the depth, length, breadth and height of the love of God even as it says in Ephesians. In time, she discovered India Bible College and Seminary in Kerala, India, 1,750 miles from her home in Nepal.

In 2021, Sarita was admitted to IBC in the three-year Bachelor of Theology program. She will graduate in 2024 and return to Nepal.

Many students like Sarita Kumari Shah enter IGO training centers do not have the financial means to fulfill the calling God has placed upon them. You can help them when you pledge $60-120/month for each student. You can help support an evangelist working in an unreached area of India by committing $100-250 a month (depending on location and family situation). We welcome your partial support. Each student needs regular prayer support.

Pray God’s provision for each IGO student and evangelist.

Pray about your own involvement in their lives and ministries.