Unlikely Testimonies From Unlikely People in an Unlikely Place 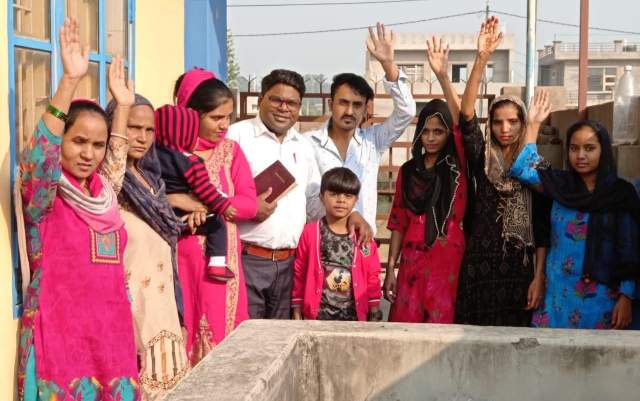 Praise God for what He is doing through the ministry of Pastor Sanjeev Kumar in Kala Amb, in the state of Haryana.

Pastor Sanjeev Kumar is spiritual leader of a fellowship of Christ followers that did not exist until four years ago. Indeed, his little flock is the only such Christian group in this factory town of 53,000. But Pastor Sanjeev and his little flock are beginning to have an impact upon this industrial community with some of the worst air pollution in India.

Sanjeev Kumar was born and raised in Haryana in a Hindu family. His family followed Jesus in 1992, but for a number of years he went his own way, strung out on drugs and doing things he doesn’t like to talk about. When he came to Christ in 2004, he knew God was calling him to gospel ministry, but he left Haryana, vowing never to return, because of the bad memories.

Beginning in 2009, Sanjeev Kumar studied for five years at India Bible College and Seminary, first earning a B.Th. and then an M.Div., immersing himself in the Word of God and completing his studies in 2014. For three years, he taught and counseled students at Punjab Bible College, a position he greatly enjoyed. Deep down, he knew God was calling him back to the place he most feared—Haryana. He knew he must take the gospel to one of India’s most unreached areas.

He and his wife, Neru, and young son, Enoch, moved to Kala Amb on July 15, 2017. He describes the area, spiritually, as “hard soil,” completely dominated by Hinduism. A nearby temple draws more than 3 million pilgrims a year. But in less than a year, he had baptized 42 people who have continued to grow in Christ and become a strong backbone for his growing fellowship of believers and seekers.

A sizable number of the congregation come from the Rajput, or warrior, caste. They tend to dominate people from village areas, and are normally extremely hard to reach with the Good News. But God’s Spirit is moving in the lives of even these hardened people. 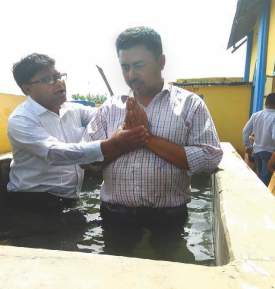 Such as Ashok Kumar. He is a Rajput and was a factory owner, but he had so many debts and loans to pay off, he was seriously considering suicide. He heard about Jesus Christ and decided to turn over his messy life to Him. His life completely changed, even more than he expected. He no longer runs a factory but is content to run a grocery store. He is continually growing in his relationship with God.

His father vehemently opposed his conversion, but Ashok Kumar does not fight with his father. He remains humble and obedient to him in the Indian way, as far as his new faith allows him. His family, friends and the surrounding community have noticed a dramatic change in his character, and he has impacted them in major ways. 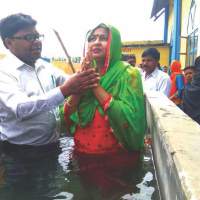 One of those impacted by the change in Ashok Kumar’s life was his wife, Suman. One Sunday, she was touched by the power of God, confessed her sins to Him and committed her life to Jesus Christ. Now, she freely shares her testimony wherever she goes. 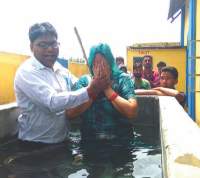 Another of Ashok Kumar’s relatives influenced by his testimony is his sister, Mrs. Jagwanti. She was a very sick woman who asked for prayer. When Pastor Sanjeev prayed for her, an evil spirit manifested itself. She was the follower of a deity named Peer Baba. She had even dedicated a room in her house to this spirit and regularly got possessed every Thursday. But she wanted freedom and turned her life over to Christ, ending her demon possession. 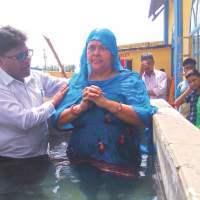 Ashok Kumar’s oldest sister, Salindro Devi, was deeply moved by the character change in her brother and started coming to church from a distant village. Her ex-military husband became furious over this and beat her. But she remained faithful to Jesus and was baptized. 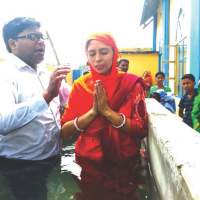 A third sister, Seema Rani, attracted by the change in her brother’s life, came to the church and was powerfully touched by the Holy Spirit. Now a believer, she became a strong woman of prayer and an effective witness to the women of the power of Jesus to save. 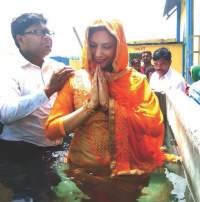 A fourth sister, Mrs. Anju, learned about Jesus from her brother and came to the church. When she heard the testimonies of many other people there and heard the Word of God, she committed her life to Christ and took water baptism. Over the past three years, she has become a powerful witness, winning several of her family members for Christ. 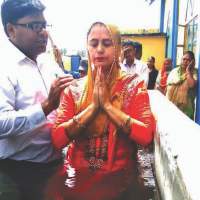 Still another sister is Mrs. Sanju, who followed a guru based in America. She totally opposed the conversions of her family members, and she wanted to pick an argument with Pastor Sanjeev. She came to the church, but felt the power of the Holy Spirit in her life, completely changing her attitude. Today, she is a vibrant witness for the Lord. Her husband still opposes her, but she continues to tell the women of her village about Jesus.

Ashok Kumar’s sister-in-law as well as a renter in their home from Nepal, along with her daughter, were moved by the changes coming in the lives of their Rajput landlord and Rajput family members. The daughter was instantly delivered from the power of an evil spirit.

All these people of “impossible” Rajput background, plus numerous others, were baptized less than a year after Pastor Sanjeev came to Kala Amb. The testimonies of these and others continue to impact the community so that the light of Christ is beginning to dispel the darkness.

Pray for a growing beachhead of dynamic faith in Jesus in this Hindu town of Kala Amb.

Pray for God’s anointing upon Pastor Sanjeev and his family, spiritually, mentally, emotionally and materially.

Pray that Kala Amb’s story will repeat itself in every community of India, large, small and in between.